There are 15 different positions on the rugby field and each player has a specialized role and a range of duties they are expected to fulfill. Rugby players also come in all shapes and sizes as some positions require strength and muscle while others require lightning speed and agility. In this article we are going to focus on the winger position. 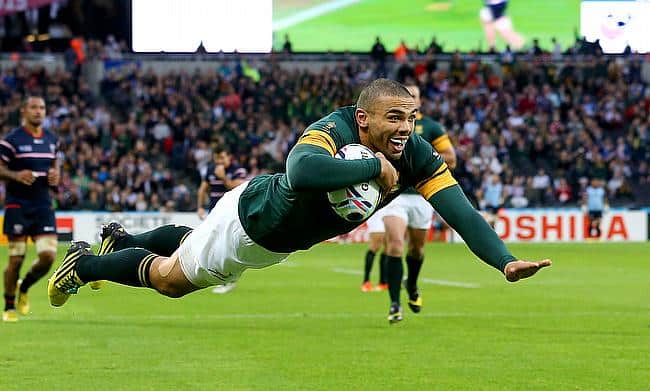 What Is A Winger In Rugby?

A winger in rugby is a player who stands on the sidelines and plays in the backfield. Their main role is to run with the ball and score tries in the corner of the field. Rugby wingers are known for their speed and explosiveness. They tend to be smaller and leaner than average players.

Wingers at least the good ones anyway are try scoring machines. They are expected to make players miss in the open field, go on long runs down the sideline and also support players who have made a line break. You will often find that a rugby player will pierce the defensive line and find himself in open play with just the fullback (player who stands behind the defensive line to play cover defense, find more about fullbacks here) to beat, he will then hear a scream from his winger who will be standing right next to him waiting for the pass. The ball runner will then draw in the last defender before throwing a pass to winger who will stroll over the try line untouched.

Rugby wingers are definitely known for their attacking prowess while also being famous for their sometimes weak defensive skills. Wingers can often get away without making many tackles because the ball often stays in the middle of the field and when the action finally does reach the where the winger is defending he can use the sideline to force players out of bounds or to pass.

A winger is also expected to drop back behind the defensive line when it looks like the attacking team is going to kick the ball. Wingers are known for their ability to leap in the air and catch the ball that has been kicked. Some wingers are capable of kicking the ball but many will pass the ball to other players such as the flyhalf or inside centre who are more known for their kicking abilities. A good winger will also quickly react when an opposing attacking player has broken the defensive line and chase them down to tackle them. Their lightning speed allows them to be effective in cover defense.

How Big Are Wingers In Rugby? The average professional winger in rugby is 6ft0 (182.5cm) tall and weighs around 200 pounds (90kg). Wingers have the physique of bulked up sprinters as they are expected to be extremely quick and explosive but also need added muscle mass to deal with the physicality of rugby.

Wingers tend to be some of the lightest players on a rugby field but in recent years it is becoming more common to find bulked up wingers who weigh close or even more than 220 pounds (100kg). Wingers for the most part are the same height as the average backline player but they often a little shorter than centres or fullbacks.

Wingers are also one of the leanest players in rugby. Their bodyfat percentage is typically between 10% and 13% and many have visible abs. Wingers need to be a low bodyfat percentage as excess bodyfat slows them down and reduces their effectiveness in attack and in cover defense. If a rugby winger gets run down in the open field or can’t chase down a player who has made a break they won’t have a contract for very long.

While wingers need to be lean and fast like sprinters they need to possess a good deal of muscle which makes them considerable heavier than the average sprinter who typically weighs between 170 (77kg) and 175 pounds (80kg). Wingers use this extra muscle to generate power when they are running the ball into contact and when tackling players many of who of whom weigh in excess of 220 pounds (100kg)

What Number Is A Winger In Rugby? In rugby every position has its own specific number. It is not like in other sports where you can choose your own number. In the case of wingers they are forced to wear either the number 11 or 14 and usually they don’t even have a choice between those numbers as left wingers often will wear 11 while their right side counterpart will rock the number 14. The only time you will find a winger wearing a different number is when they are a substitute, in this case they will wear either 22 or 23.

What Makes A Good Winger In Rugby?

A good winger in rugby is fast, agile with top ball handling skills. They are capable of great acceleration and have the ability break the defensive line, finish attacking plays by scoring and go on long runs in the open field. Good wingers also run strong attacking lines and support ball runners.

If you want to be a good rugby winger in rugby you need the following skills and attributes: