Rugby referees have reserved the right to send players from the field since rugby first started. However, yellow and red cards are a more recent tradition borrowed from football. In this article we going to explain exactly what a yellow and red card in rugby is and a history of the punishments. 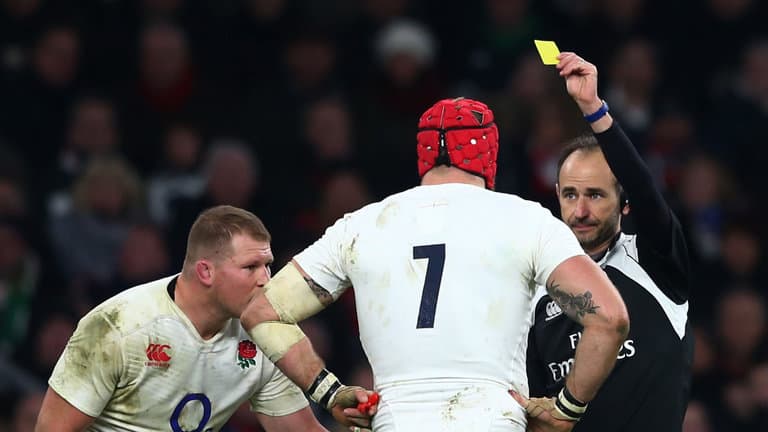 What Does A Red Card In Rugby Mean?

A red card in Rugby is the highest punishment a referee can hand out. After receiving a red a rugby player must immediately leave the field and is not allowed to return. Red-carded players cannot be replaced and rugby side must the rest of the game down a player.

A red card has a drastic impact on a game of rugby. It is incredibly difficult to win a rugby match when you playing one man short as the attacking always has an overlap and just simply has to spread the ball wide to find attacking opportunities. A side that receives an early red card is almost always guaranteed to lose. Due to this huge impact on a game of rugby many fans want to see red carded players substituted to ensure a competitive match ensues.

What Are The Reasons For A Red Card In Rugby?

The main reasons for red cards in rugby are extremely dangerous acts of play such as spear tacklers, extremely high tackles, punches  and other strikes.

Red cards are typically reserved for the very worst acts on the rugby field. Any act that could seriously hurt an opposing player often results in a red card such as a spear tackle or a punch.

Which Rugby Players Have Received The Most Red Cards?

Mario Cagnani (Uruguay), Alesana Tuilagi (Samoa) and Paul Emerick (United States) have the most red cards of any rugby player after being sent twice in internaitonal matches.

Below you can find the tackle which resulted in Alesana Tuilaga being red carded. The Samoan bulldozer absolutely clobbered the Sprinkgbok Jean de Villiers.

What Does A Yellow Card In Rugby Mean?

A yellow card in rugby forces the guilty player from the rugby field for a period of 10 minutes. After this time the player can return to the match. During the 10 minutes the sent off player can not be replaced.

Sometimes, a coach sees that the player’s head is in the wrong place. They’re too pumped up or angry and are likely to commit another infringement. A good coach will substitute the player to avoid the massive disadvantage of a double yellow i.e. a red card.

What Are The Reasons For A Yellow Card In Rugby?

The main reasons for a yellow card in rugby is repeated infringements such as being caught offside multiple times, high tackles, deliberate fouls to stop a side from scoring such as tackling a player without the ball on purpose or not rolling away at the ruck.

Repeated and deliberate foul play will often result in a yellow card during a rugby match. The referee has great discretion and is able to penalize and deliver warnings before reaching their pocket for a yellow card.

Which Rugby Players Have Received The Most Yellow Cards?

Michael Hooper (Australia) holds the record for most yellow cards in international rugby with 8. Not far behind are Bryan Habana (South Africa), Jamie Cudmore (Canada) and Marco Bortolami (Italy) all with 7 yellow cards.

While Michael Hooper is not known for being a dirty player he is a fierce competitor who pushes the rules at the breakdown where he is known to occasionally enter from the side and use his hands. Hooper is also known for putting on some huge tackles which sometimes creep a bit high and drawn the attention of the referees.

Can A Yellow Or Red Carded Rugby Player Be Substituted?

A rugby player who has received a red or yellow card can not be substituted. The guilty side must continue playing with one less player. However, the coach can substitute other players. For example if the halfback is sent off the coach replace the winger with the backup halfback.

What Happens If A Prop Or Hooker Is Sent Off?

If a prop or hooker is sent off a rugby coach is forced to replace another player on the pitch with a front row forward. This is to ensure the penalized side can compete safely in the scrum as front forwards have specialized skills.

In this scenario a flanker is usually replaced so the side with the sent off player will have a full back line and scrummage with 7 players instead of 8.

Does A Red Card Mean A Ban In Rugby?

A red card in rugby leads to a subsequent suspension based on the severity of the foul. Red card bans can last for 1 week minor infractions such as a slightly high tackle to lifetime bans for violent attacks on referees or spectators.

After a player receives a red card they will have to front a disciplinary committee where they will plead their case in front of a judiciary. The judiciary will hear the player’s arguments, assess the case and come up with a judgement. Player’s can often have their bans significantly reduced by pleading guilty.

Can Players Appeal A Red Card In Rugby?

Rugby players can appeal any on field decision including a red card. Rugby players can plead their case in front of judiciary and also write to the player’s board. If they are successful they can have their red overturned and avoid fines and suspensions.

Unfortunately, if you have received a red card your chance of successfully appealing the decision is unlikely. The disciplinary board typically will side with the referees over the player. However, never say never I had a teammate who was accused of punching an opposing player and received a red card. After the game the video feed revealed he had only pushed the opposing player and his red card was overturned and he avoided any suspension.